Funny Dog Stories: Getting Cold Outside

We had our first hard frost last night – winter is truly on its way in here in central Missouri. To that end, a toasty ADHDog is a happy ADHDog. We have broken out his coat, which is excellent because it makes him look like Robin Hood. He also has a sweater, but tolerates it about as well as I imagine a cat would – mostly by throwing himself down on the carpet and worming around on his side, before finally giving up and flopping like a dead fish while giving us the most betrayed stare he can muster. He’d really rather shiver outrageously as soon as he gets outside than have anything even resembling clothing anywhere near his skinny little butt.

As soon as he gets back in, he’s in front of the space heater. 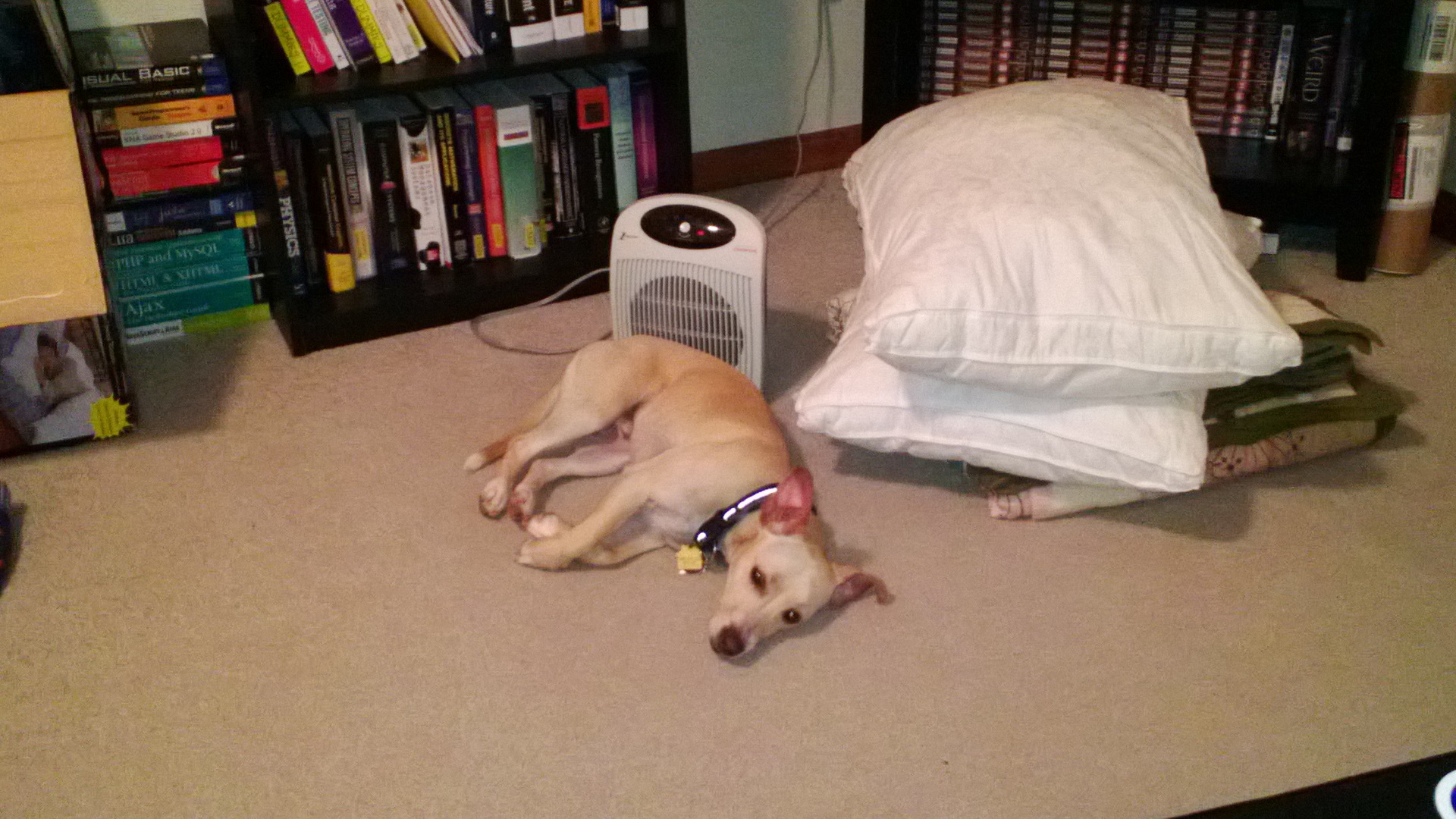 He’s got a system. Start with face towards the heat, and rotate 90 degrees every 5 minutes to ensure even baking. 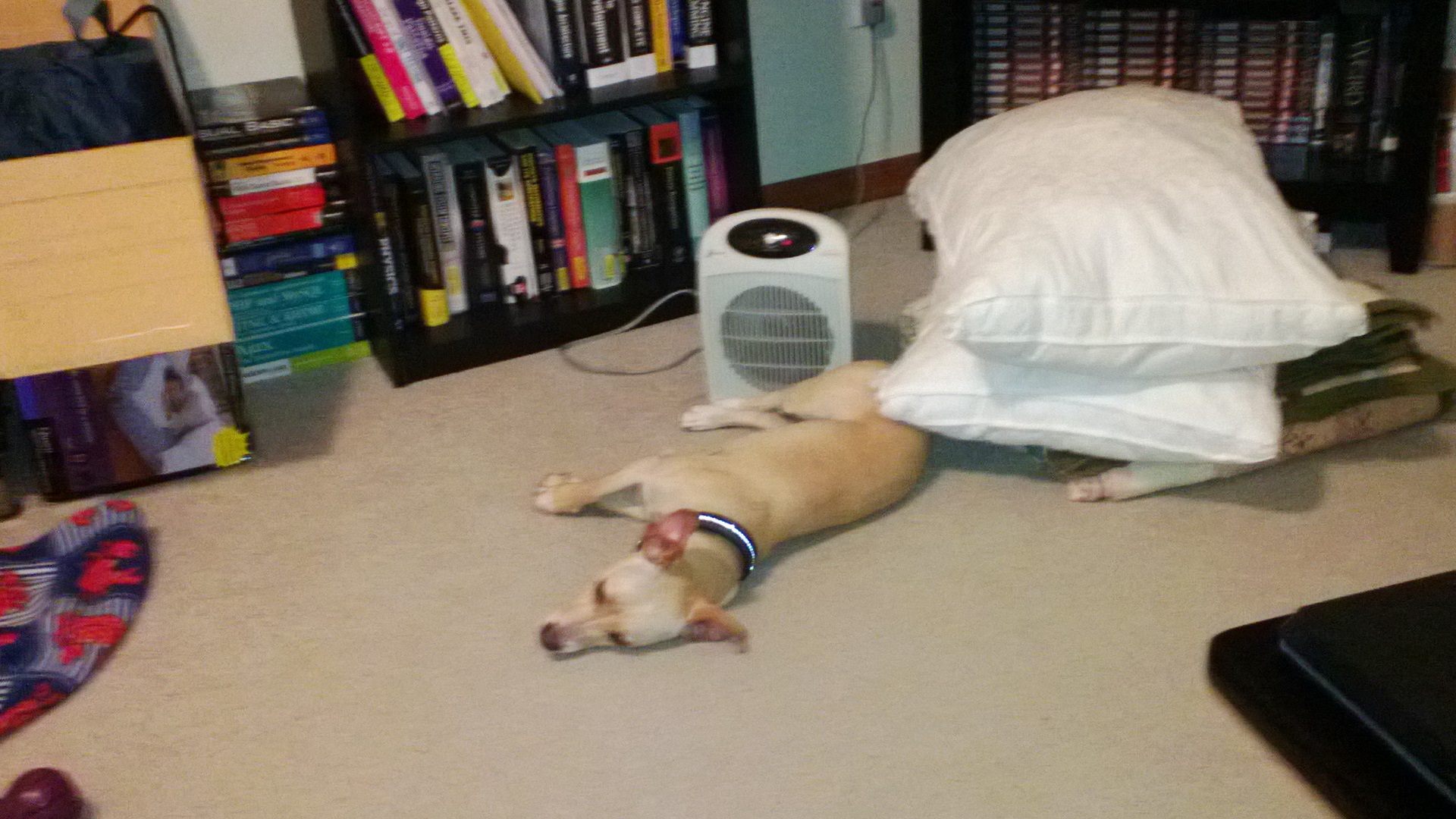 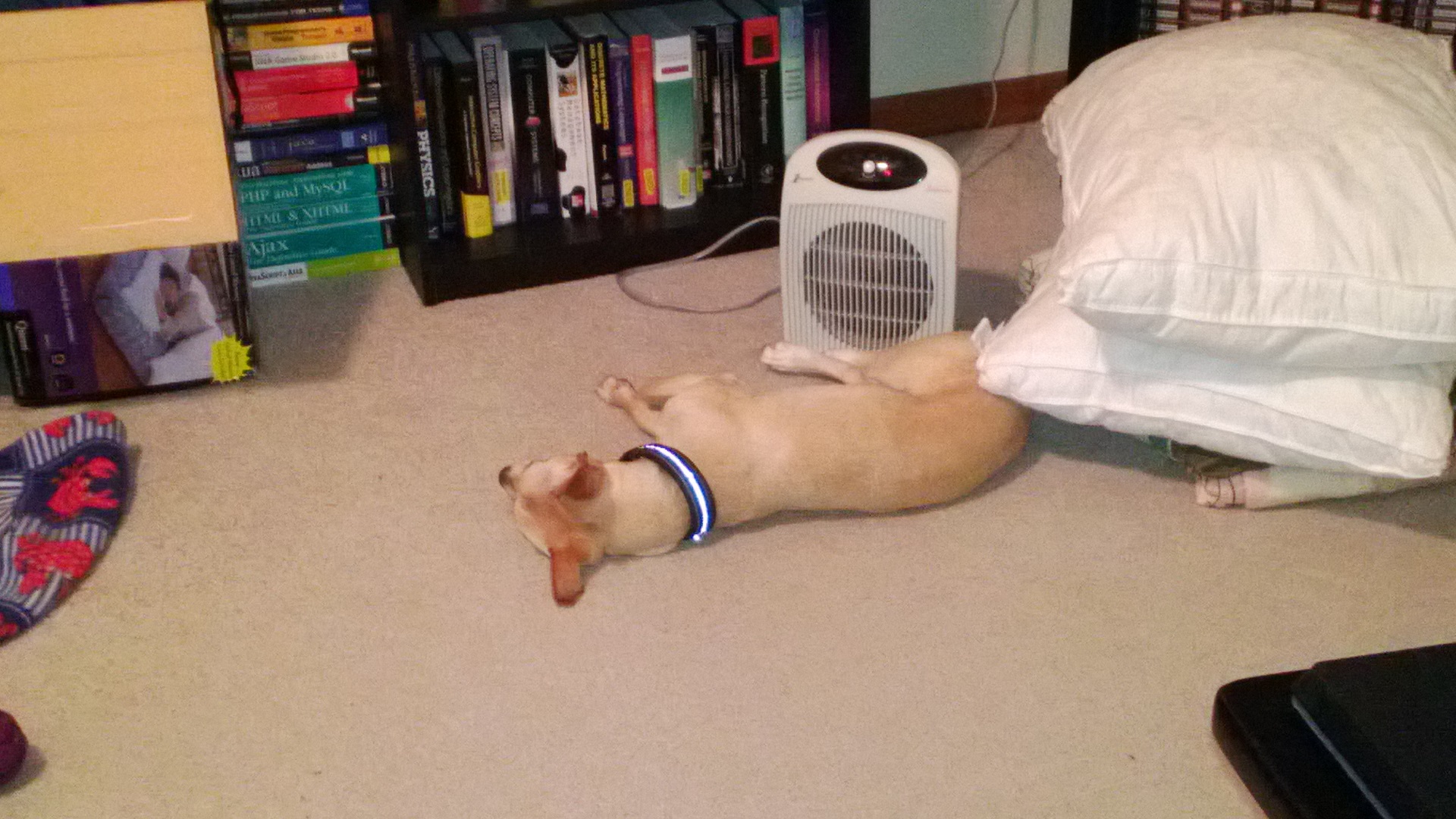 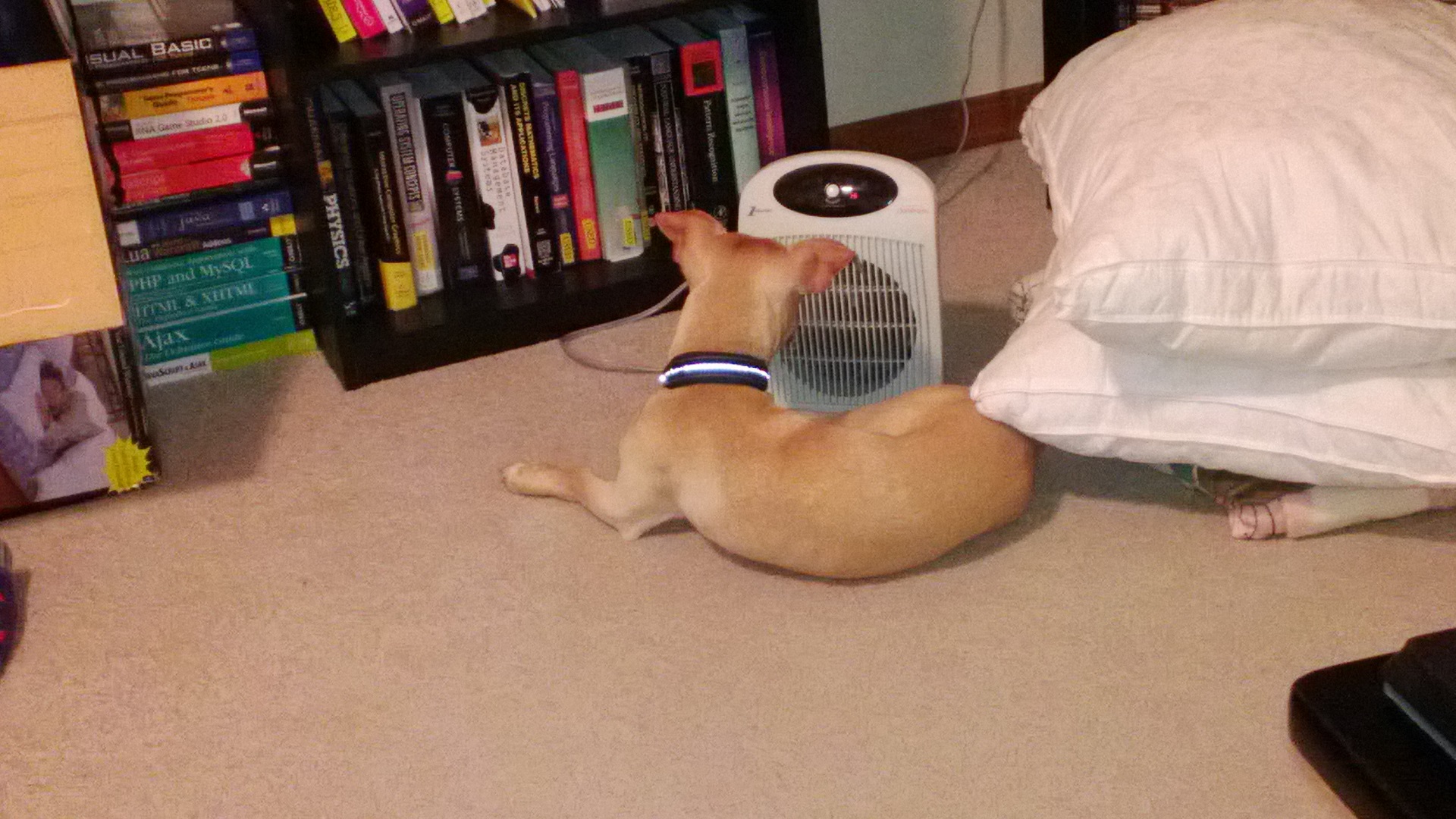 We have to remove his collar indoors in the winter because the buckle will get so hot it’ll burn him. He also recently discovered that the loveseat, positioned over a heating vent, serves to funnel hot air out the front, and has begun to lift up the dust ruffle and wedge his butt under the couch so that it is more thoroughly warmed. 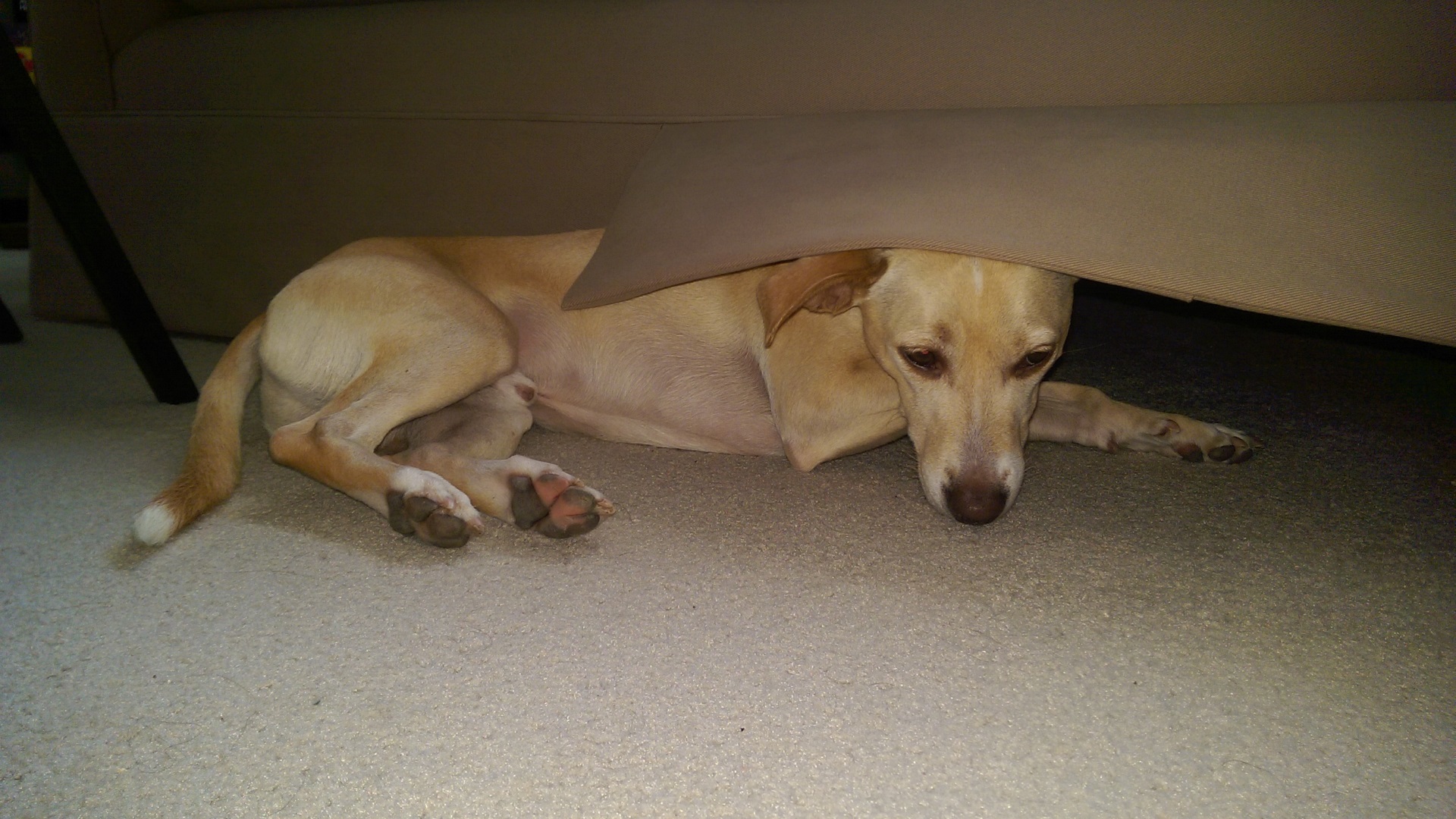 On behalf of my cold feet, I conducted some hopeful research, which revealed that there are dog breeds who were bred to be bed- and lap-warmers, including the Shih Tzu and the Xoloitzuitle (also known as the Mexican hairless dog)! ADHDog did not receive that gene, I think, as when I pressed my icy toes against his belly last night, he woke up, barked at me, and stalked away to his bed, which is typically a less desirable sleeping location, but, at least, free from cold feet. On the plus side, I think we’ve found a pretty effective way to keep him out of our bed at night.

Make sure and subscribe to ADHDog for a chance to try out the ADHDog remote feeder and exercise system for free later this year!